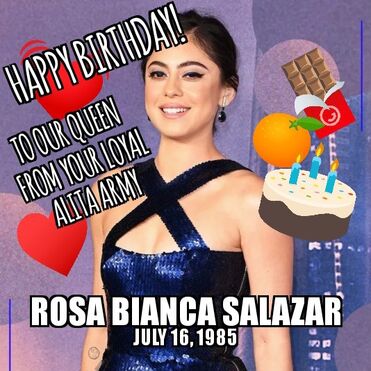 In honor of Rosa Salazar's birthday, a biographical tribute presented during the Queen's Royal Holiday WeekJuly 16-23.

Happy Birthday, our Queen Rosa Bianca Salazar!!! Today we, the #AlitaArmy, begin a week long festival in your honor.

Rosa Bianca Salazar was born on July 16, 1985.  She spent her childhood in Washington, D.C., and Hyattsville, Maryland. She grew up in her grandmother’s home in Greenbelt, Maryland; listening to her sing in Quechua and eating Peruvian food.

On Her Own Edit

Rosa attended Eleanor Roosevelt High School in Greenbelt, and was active in the school theatre program.

Until the age of 15, Rosa was under foster care. After leaving her home at the at 15, the nomadic teen year Rosa spent her days wandering across America.

At times, had to do bartending behind a Washington, D.C., punk bar. As a teenager, Rosa had developed a keen desire to become a professional storyteller. Thereafter, she, and her Pit Bull dog, moved to New York to invest her hustle into her dreams.

While in New York, Rosa Salazar worked with College Humor; a humor website.

In the initial days of her career, she also appeared in several sketches.

Rosa has enjoyed entertaining others since the age of 15 and became serious about acting after moving to New York City as a young adult.

After doing odd jobs in New York, Rosa shifted to Los Angeles in 2009; where she got roles on two hit TV series, American Horror Story: Murder House and Parenthood. Both the TV series gave her the much-required recognition in her career.

Reaching for the Stars in Dystopian Worlds Edit

In 2015, she appeared in two more popular films - The Divergent Series: Insurgent as Lynn, and Maze Runner: The Scorch Trials as Brenda.

The Performance of a Lifetime Edit

The tattoo Rosa has on her right forearm is of two birds sitting on a branch and a moon.

Rosa is a non-vegetarian who's favorite food is Peruvian cuisines.

And, of course, oranges and chocolate.

Rosa is a gorgeous lady who's in the prime of her career with big projects to her name and is loved by the audience in every character she plays.

Rosa likes to live her life out of the reach of media. As of now, Rosa looks to be single and happy and focusing more on her career.

Rosa's interview on seeing herself as Alita for the first time: that was her up there, that was her face. But most importantly, her performance was there.

Having been born in British Columbia, Canada, Rosa has dual American/Canadian citizenship.

(Note: we need to verify this as there has been conflicting information given for her birthplace)

"I was just that kid in the family that you put on the table and watch it dance around, and you're like, 'Oh, look at that hyper kid!'"

"I was emancipated at 15. I went to school and had a full-time job and apartment, and ever since, I've been on my own, parenting myself."

"I was that kid who was always practicing crying or falling asleep or being angry or being excited. I was that weirdo in my room making faces." - Rosa Salazar

"I told myself when I was broke and homeless that my biggest goal was just to have a house. That goal was achieved. I'm just really, really lucky."

On this day we celebrate Rosa's birth and life, how she overcame hardships to become her own self, be inspired to follow the path for you. Be honorable and humble, and inspire others in your own way.

You Did It Kid Edit

Retrieved from "https://alitastan.fandom.com/wiki/Rosa_Bianca_Salazar_Tribute?oldid=340"
Community content is available under CC-BY-SA unless otherwise noted.